"A #GIRLBOSS takes her life seriously without taking herself too seriously.  She takes chances and takes responsibility on her own terms.  She knows when to throw punches and when to roll with them. When to button up and when to let her freak flag fly...I have three pieces of advice I want you to remember: Don't ever grow up.  Don't become a bore.  Don't let the Man get to you. Okay? Cool. Then let's do this." 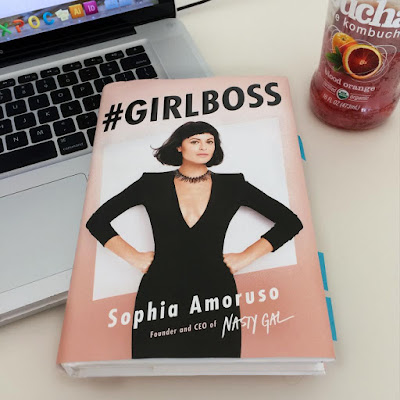 Here is a book that has been making its way through female-centric book clubs like red wine and gossip.  An odd mix of memoir and business advice, #GIRLBOSS is an inspiring story that encourages women to challenge society's stereotypes and be unapologetically themselves.  With that said, this definitely wasn't the feminist manifesto that I had anticipated.  While surely geared toward young girls and 20something women, Sophia's story and philosophy reads much more "entrepenuer power!" than "girl power!" and that's just fine by me.

Though I truly enjoyed this book and read it quickly, I will admit that I found some parts to be a little self-righteous and contradictory.  For example, as a person who is all about "sticking it to the Man" and once lived her life as a shoplifter, I wish Sophia had delved deeper into her mindset while she was making deals with investors and incorporating more traditional business practices into her company. But that's just a minor criticism.  For the most part, I really enjoyed Sophia's refreshing style of writing, and there were a lot of great stand-out moments throughout the book. It'd be hard to write them all down without simply typing out a manuscript of the book in its entirety, so I'll leave you with just a few of my favorites:
...I especially like that last one.
Posted by Krystal at 2:26 PM

Email ThisBlogThis!Share to TwitterShare to FacebookShare to Pinterest
Labels: books